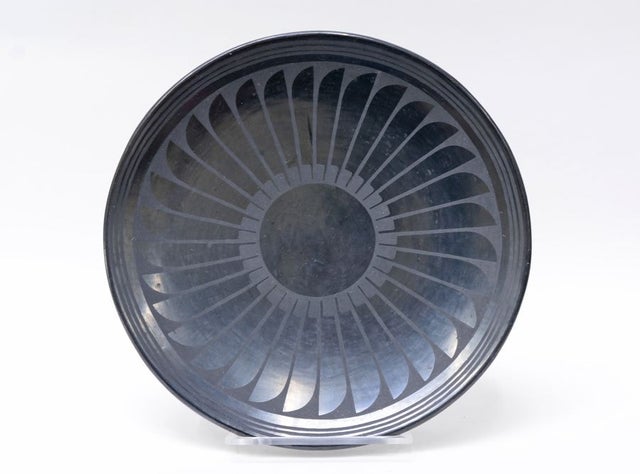 Maria Poveka Martinez (1884-1980) is probably the most famous of all pueblo potters. She and her husband, Julian, discovered in 1918 how to produce the now-famous black-on-black pottery and they spent the remainder of their careers perfecting and producing it for museums and collectors worldwide.

By 1923, Maria began signing Marie on pieces made by her and Julian. His name was omitted because making pottery was “woman's work.” Pottery made by Maria and painted by Julian, signed Marie, was most probably made between 1920 and 1925.

Pottery made by Maria and painted by Julian between 1925 and 1943 bears the dual signature Marie + Julian. By 1925, and until his death in 1943, Maria shared the signature with Julian.

Following the death of Julian, their son Adam and his wife Santana helped Maria with the design and firing of her pottery. Pieces made between 1943 and 1954 are signed Maria + Santana.

When Maria began signing pottery, she was told, probably by Chapman, that “Marie” was a more familiar name than “Maria” to the non-Indian public. She therefore signed the name “Marie” for about 30 years. Following the publication of Alice Marriott's book, Maria: The Potter of San Ildefonso, she began signing her true name, “Maria.”

Around the mid-1950s, Popovi Da began working with his mother, helping her with designing and firing her pottery. They began to co-sign pieces Maria - Popovi, and Popovi started putting a date on each piece, probably around 1959.

Maria often made small pieces of pottery without the assistance of her husband, her son, or her daughter-in-law. These are always highly polished, un-decorated pieces and are usually quite spectacular and graceful and exhibit the true nature of her genius. They are signed Maria Poveka.

Sold Out
Add to Cart